Only nostalgic and wrecks & relics photography in here please, nostalgic posts should be over 5 years old.
Post Reply
14 posts • Page 1 of 1

A pleasing study of this Fokker F27-200 taken at Edinburgh in 1976. I remember at the time I couldn't help thinking that the windows were all nicotine stained, as the 4 flight crew immediately lit up Gauloise when they arrived in the crewroom. Things weren't much better with the outgoing passengers, you could just about make out where the cafe was in the old terminal building through the smelly Gauloise fug that they created. I swear just after F-BUFA left for Perpignan, there was a blue vapour trail heading south-east in the sky - which was not given off by the Darts, although possibly even they ran on Gauloise French cigarettes as well, looking at the state of the starboard exhaust!! 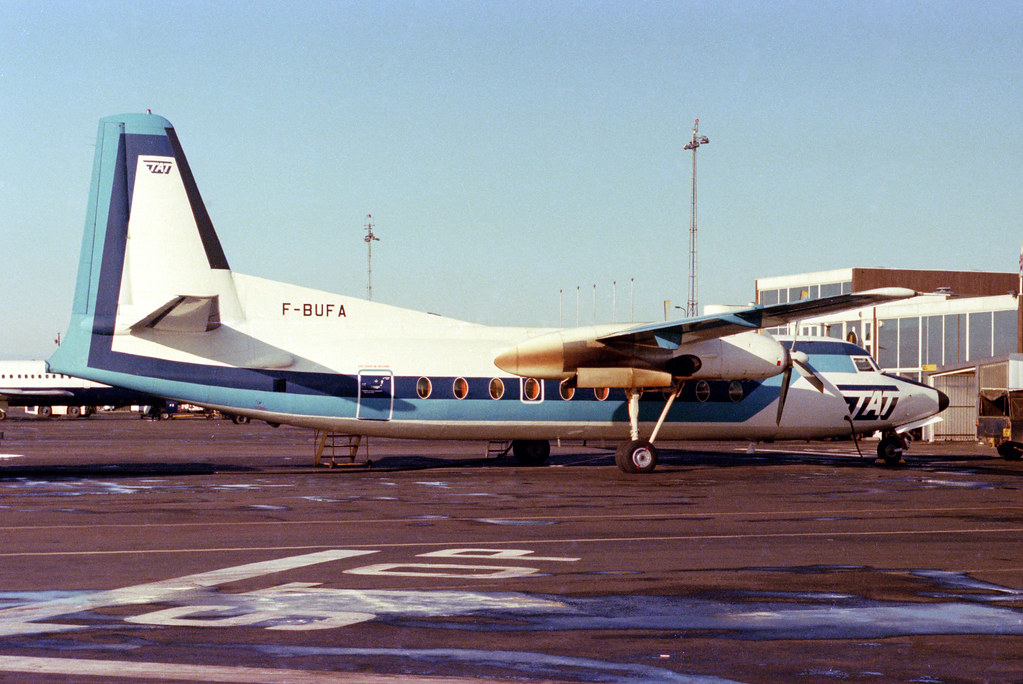 Is that Stuart's (the Air Anglia engineer) Land Rover parked in front of it? Was his surname Drummond?

I do remember selling packets of Sugar Puffs and Frosties to Tarom and Interflug crews (at highly inflated prices), though.......................but that's another story!

Andy was quite correct with his comment a few months ago, we should really write a book together sometime.

Do you remember when the new guy that I was training managed to overturn a Mitchell's Transit van on the 13 threshold? Funnily enough he got the sack due to having vast amounts of lager in the flying club beforehand (luckily it was on my day off).......................

Hi Mike, good to hear from you again. Stuart Drummond was the Dan-Air engineer who looked after the Comets. He used to pull them over to the Ferranti hangar from the old terminal and latterly the new terminal. Behind the nose undercarriage bay, there was a small hatch that gave access to the electrics bay, in which you could jump up into, crawl along, then push up another hatch wchich let you into the galley. (A great way of accessing a Comet without steps). ALL the crews coming into Edinburgh from the IT seasons used to drop their duty free's (and more) into this electrics bay whilst in flight, and even though Customs rummaged Comets many times, they never ever found the hiding place. Stuart would access the bay once he had pulled the Comet over to the far side, remove the ill gotten contents, then take them all down to the Royal Scot Hotel.....

Jack Williamson was the Air Anglia engineer who did the line servicing. His boss was a chap called John Ward.

Don't remember the Transit incident, but I remember a catering truck got pushed over on its side when we were training on the air jetties.....

Yes on the book!!

Silly me, I remember Jack now, but I don't remember John really. Stu was usually a good bloke, he did many a favour for us with the vehicles we had, and we made sure that he didn't go hungry!

I don't remember the catering truck getting pushed over, that must have been after I'd left Edinburgh in late '81?

The customs rummage crew were a nightmare, they were based at Leith docks and even the customs team at the airport didn't know when they were likely to appear (I think Gerry Lynch (the customs officer) told me that), they would go through an arriving aircraft with a fine tooth-comb after the passengers had deplaned and no catering or bar boxes were allowed to be removed until they'd gone through everything - we had many a very late night because of them.

Talking of Gerry Lynch............we were in Tenerife for our honeymoon in 1980 (the ex and I, not Gerry!) and were in the queue for the buffet breakfast at the hotel on day 2, I turned around and he was stood behind me in flip-flops and matching Mickey Mouse shorts & shirt.

It was early 1977 when I pushed the catering truck over....don't think it was one of yours though....there were 2 catering companies at Edinburgh - could it have been a Trust Houses Forte....I just can't remember.
They told us whilst training that an air jetty weighed 50 tons, and would stop immediately contact was made anywhere on the strip that went around the mouth, even at full chat. It didn't.

Yes,it is a small world!

Loads of experiences over the years......

Nice picture. I liked seeing those TAT with different colours for each aircraft. Same as the old Court Line.
cheers
Pete.
My FlickR Albums at 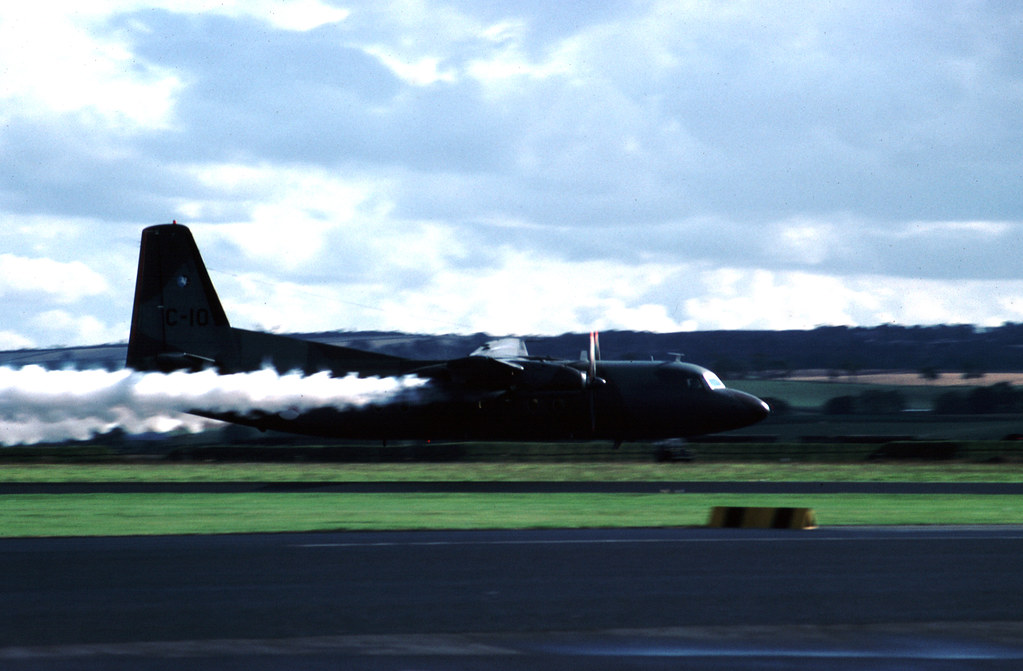 Not a great picture, I know, but you'll never see this again at an airshow!
Top

Nice shot John, the Dutch AF Troopship display was the highlight of many air shows, looks like Leuchars?

I'm just trying to get my head around your air jetty incident with the catering truck, as far as I remember the new terminal opened at the end of May '77, that's when the BAA handed over their ancient (all white with additional rust) Bedford hi-lift catering truck over to us (Trust House Forte Airport Services, but known as ACS (Airport Catering Services)) andwe were only given a few days notice of this change. It sounds like your training incident happened before the new terminal opened?

We had to employ, then train, our own loaders from that day onwards as the BAA had done all the transportation for years between the flight catering unit and the aircraft. We had to use the awful thing until our own new vehicles were built and delivered to us several weeks later.

We were the only in-flight catering company at the airport and soon had a small fleet of our own vehicles (in light blue colours with the "flying fork" design on the side), we didn't have any of our own vehicles at the time of your incident, so was this a vehicle that the BAA had borrowed from somewhere else maybe - as I've never heard of this before?

What shall we call the book?

It was Leuchars Mike. Photography was always difficult as the crowd-line always faced directly into the sun. Did you ever fly on Air Anglia F27's...?
Top

Uuoret wrote: ↑
Thu Jun 21, 2018 4:01 pm
It was Leuchars Mike. Photography was always difficult as the crowd-line always faced directly into the sun. Did you ever fly on Air Anglia F27's...?

Did you read my edit above?

Hi Mike, just seen the rest of your post!

Yes, I knocked it over before the new terminal opened, as that's how we did the training whilst the stands were empty. Colin Mitchell was there too (I think) when it happened.

It was the BAA loaders and some technical services (?) that righted it - there wasn't much damage - few dents and the loss of a wing mirror and drivers window.

LondonEye wrote: ↑
Thu Jun 21, 2018 8:27 am
Nice picture. I liked seeing those TAT with different colours for each aircraft. Same as the old Court Line.
cheers
Pete. 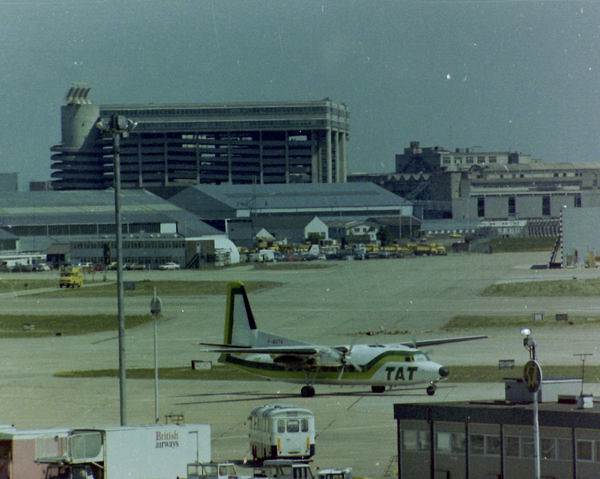 Good picture - unfortunately never to be seen again at LHR. As well as blue and green, what other colours did TAT display on their F27's?
Top

Users browsing this forum: No registered users and 28 guests