by Tally-ho
Real time aviation streaming (livestream shows says the Facebook page) has arrived. Some hate it some love it, however, the entrepreneurial spirit of the human kind is alive and well.

by Mike
If I wrote what I truly think about him and his side-kick Gilly on here, then I would have to ban myself from this forum for disgustingly bad language.

by Rugbyref
Having read so much about him, I followed the link above and put up with his sniffing, repetitious inane waffling for a few minutes, then had to turn off. Some of the camera work is good, but that is all.

by andygolfer
I''ve had a few looks and TBH I thought it pretty dire.

this guy's commentaries drove me up the wall in minutes (plenty of sensationalist claptrap) and I just couldn't watch it without screaming. I certainly wouldn't subscribe to any of his work.
Andy

by ap57uk
I have seen him in action and had the misfortune to meet him in the flesh. i have hear a few rumors about him and if true there is a chance he will ruin our great hobby for a lot of folks. i sincerly hope these rumours are unfounded.

by andygolfer
his claimed 180000 followers probably include a majority who looked just once and thought it was poor and never watched again . I'm probably amongst that number and I doubt I've watched him more than three times hoping to see an improvement over previous visits - which there wasn't

by BigWillp75
Seen him in action around LHR and behaviour and attitude is very poor and selfish. Very poor knowledge and very clear only doing it to make money and not because he has a like/love for the hobby.

by james143611
I did have a subscription at first but didn't last long, too annoying, keeps shouting 'Yeeeaahhhh' over anything passing by or spooling up, yes I say that myself sometimes but only in my head!! 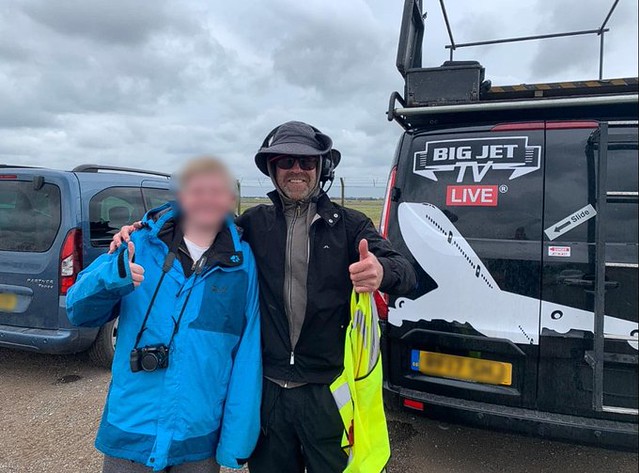 by Nighthawke
I can deal with his general lack of everything that he lacks by simply ignoring his output. BUT - and I mean a big but - that image during a pandemic with social distancing being one of the key aspects to observe borders criminality. In addition his classification of key worker is ridiculous and insulting to genuine key workers - NHS, emergency services, utilities (inlcuding me although I don't personally see myself as such but have the letter with every other employee of the company) but I stayed at home to work. Essential journalism maybe but not anyone who doesn't need to be out to report and that should be reserved for important news affecting the general public not hobbyists, especially when they are that bad!

by james143611
Most people would say turn the sound off, but that doesn't help as I like to hear planes taking off or landing, especially when a RB211 is involved.

Apparently barred from any future BA media event invitations, and quite right too I'd say...

by FlyingColours
Oh my God that was embarrassing to watch

by Unknown35
He’s an aquired taste isn’t he?
All times are UTC
Page 1 of 1
Powered by phpBB® Forum Software © phpBB Limited
https://www.phpbb.com/