by andygolfer
I received the following e-mail this morning, please take note if you visit Stansted:

Good Morning to all of our valued members

Unfortunately Manchester Airport Group and Essex Police have, after much deliberation, come to the conclusion that North Side is no longer a suitable location to spot from and all Plane Watch members and Plane Spotting enthusiasts will be encouraged to go to Belmer Road, Burton End.

This is due to a number of reasons but most importantly for the security of the North Side of the Airport.

It is with regret that I am sending this email as in the past members of Plane Watch have sent the Police valuable information and I hope that this good working relationship will continue.

sad but we did have a heads up yesterday and there have been enough warnings but sadly a minority didn't listen and the consequences will now be felt by all. I've personally worked hard to try to avert this with posts here there and everywhere and discussions with one of the FBOs who were suffering the most but still some didn't listen - too late now but a future lesson for all who think the rules don't apply to them

by andygolfer
Following discussions between the planewatch police team and MAG the blanket ban on visiting northside has been lifted as they (the police) showed evidence that the presence of RESPONSIBLE spotters has benefits with many useful reports sent to them of both suspicious behaviour and incursions into areas previously declared off limits (e.g. Universals Car Park). Some enthusiasts have been asked not to return to the airport as a result of their investigations.

The ban was introduced as businesses on the north side were getting fed up with the incursions and the impact on the privacy of their customers and their businesses in general. So to ensure that a ban is not introduced please be responsible and stick to the rules and signage and if you do see anything suspicious or intrusive please forward whatever information you can to the planewatch police on 01279 666142.

The guidelines that they have suggested are that ‘spotting’ should only be carried out from the fence line that runs between Harrods and Universals and that all other northside areas should be avoided to prevent disturbing the activities of the business operations there (for example but not exlusively Universals, Inflites, Harrods, Fayair and Titan). Cars should not be parked alongside or close to that fence line but please use the car park on the entrance road and under no circumstances leave vehicles unattended anywhere on the northside except in the car park.

This does mean that some of the freedom previously enjoyed has been curtailed but at least this is a start and hopefully things may be relaxed further in the future so please stick to these requests and the bylaws to ensure what we have got remains in place.


here's a plan to show the preferred location and the car park: 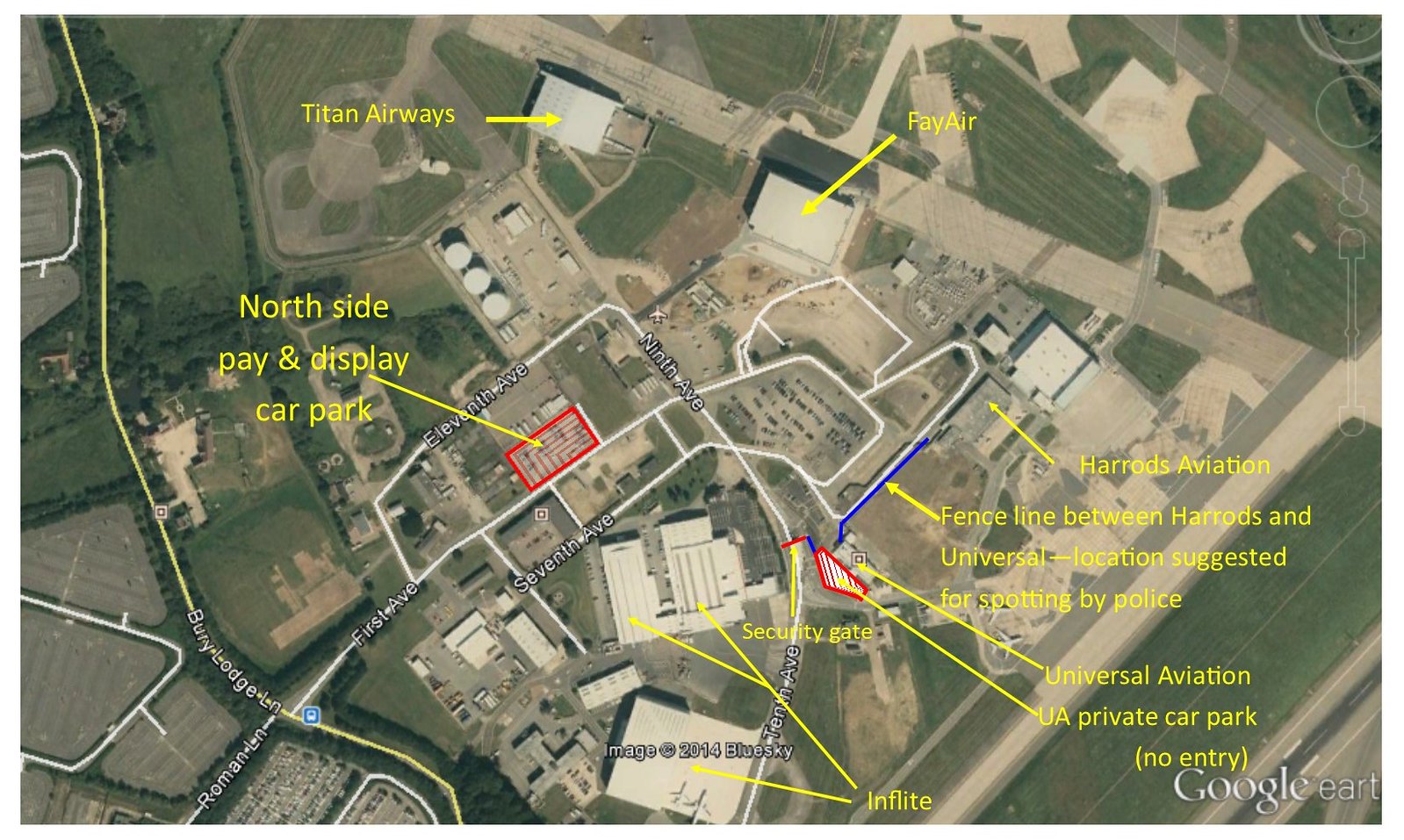 by andygolfer
sadly things have gone in the opposite direction from the previous post and it is now apparent that the business park is totally off limits to enthusiasts, this sign has now been erected on the entrance road close to the CCTV cameras: 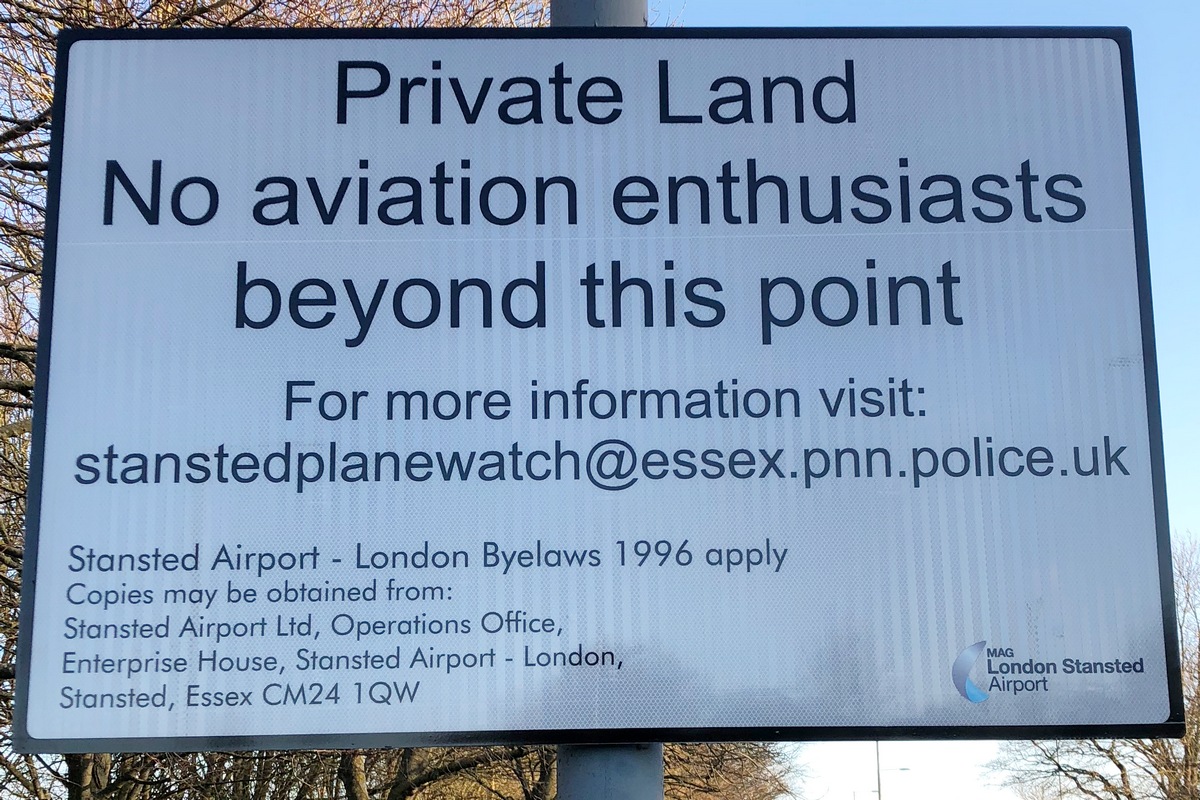 The wording is totally unambiguous and means enthusiasts must keep out. As we on the liaison group did not have advance warning I have asked the police / MAG for further information. I am awaiting a reply as the person concerned is off shift until Wednesday, therefore I thought I should bring this to everybody’s attention in the meantime as I understand that some people have already been stopped by the police and warned to stay out or face possible prosecution so they are clearly being instructed to act robustly.

Up until recently MAG and the airport police have been happy to tolerate 'responsible enthusiasts', but some enthusiasts have ignored the repeated requests not to go northside after dark and not to go into the Universal car park etc. Now -and perhaps understandably, MAG and the airport police appear to no longer tolerate any enthusiasts northside. There have even been reports of a person using the Universal emergency staircase to gain better views and photographs which in my opinion is totally irresponsible.

If I get further clarification I will post it as quickly as possible but I personally recommend that for now the bottom line should be STAY OUT under all circumstances.

by andygolfer
during my Aerozone visit on Saturday I was asked to help the police with their enquiries. They have asked me to remind enthusiasts that the northside business park is still and always will be out of bounds except for persons on official business. The only exception is for going directly to/from Butler's cafe.

They have seen a photo posted on at least 2 social media outlets obviously taken from the business park fence, a restricted area that has been out of bounds to enthusiasts for almost a year now- I've found one photo but not the other. They are disappointed that the message still isn't getting across and are in the process of tracking down the individual concerned - they take these incursions seriously so be warned (again).

please see in the original post a photo of the sign at the entrance that I took last year.

thanks for heeding the advice (assuming you all will)
Andy

by Rugbyref
Thanks Andy, I had asked (but not directly of you!) some months ago whether the cafe was still open and accessible. I didn’t get any positive responses, so good to know it is still going.

yes it's still okay to go there but only directly there and directly back out. they won't look kindly on using that as an excuse to drive right round!
Their bacon baguettes are definitely worth going there for